FZ1 Riders Show us your baby!!

Just pick this one up 2007 FZ1 with some added upgrades it's like carbon fiber parts lower fairing added and custom exhaust I love it 19,000 miles and runs great 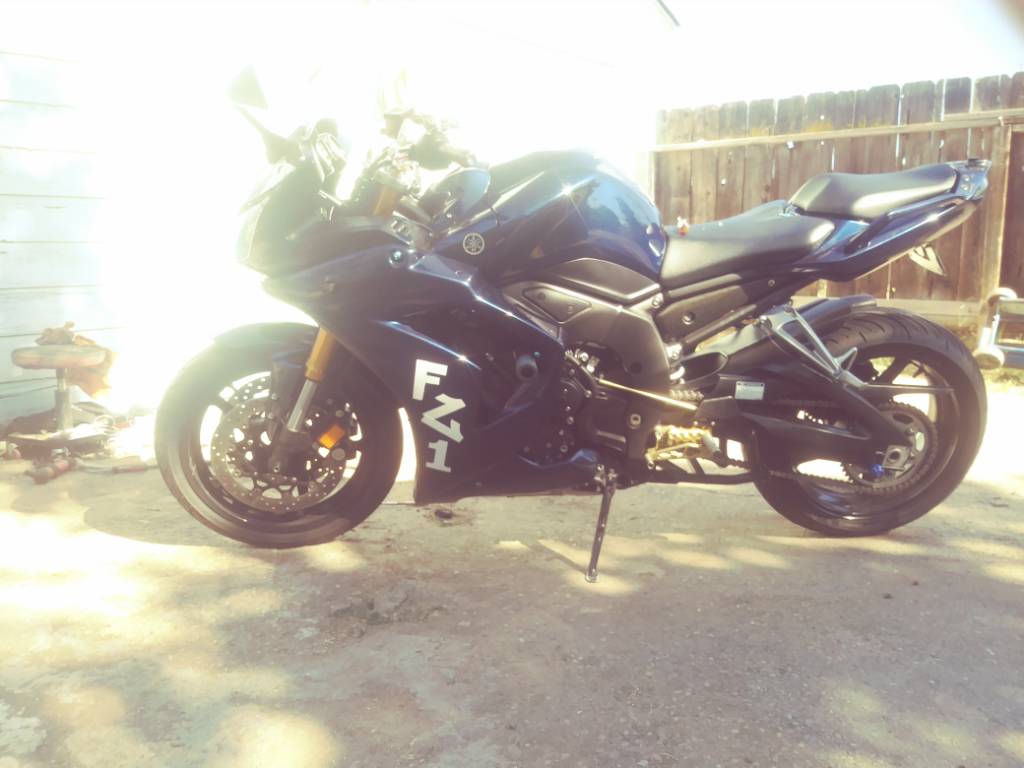 New, old guy here. This is the first Japanese bike I've owned since my Suzuki GT380 in 1976. I'm 62. Took the plunge with Yamaha Champ School and Nick Ienatch himself recommended the FZ1 to me. Found this 2014 with 7k miles on it pretty cheap. I have since done a Champ day and three track days in Phoenix on it and absolutely love it. Going to drop a tooth on the front sprocket and remove some extraneous bits (rear fender and foot peg mounts) for the next track day. Stay safe - fast. Hunter

is she lowered?
J

Well hey Fazer people, I don't usually join forums or groups. Because my plate is usually overfull and cracked, I usually research things and use forums for information finding. But I had to join you guys (gals), because not only the end of my try/Day to resolve FZ1 problem and just move forward with plan #2. It was by chance that I went into to forum that happened to have the literal and metaphorical MAP to where I was going. I have been riding since 1985, then by mid 90's had to trade my 1987 FZ700 for a car because It was affecting my reliability and the office I worked at because showing up wet in rain, suite wrinkled. I still rode here and there but didn't own my own bike again till 2018, a Suzuki intruder 800. Clean, low miles, my first non sport. Bike of opportunity, because I needed to ride again after some stressful events. forward to last month, and saw my new baby listed on Facebook market. and like my first bike (1986 VF500F) came with good upgrades, my brand of pipes, Yosh slip on,. my nickname was yosh in the club I was in in the 80's because interceptor had Yosh slip ons and because I was only white dude and there's no J sound in Spanish. also had bags, seat cowl, lower cowl, PC3 usb and more. New tech to me, so I didn't touch it till the day before yesterday. And looking at values wasn't ready to figure out, and the map/tune was actually insanely well done. Power in every spot and gear, and I'm fat in my old age and would power wheelie if I pulled to 9 on throttle. The dude that sold me said it had it's own tune and was mapped, we was second owner, a woman before him that did all the mods. so I wasn't sure why in the tune notes it had the name "Duke". So I did see the firmware was not close to newest one, so I did the low level flash, I've been building pc's since 1999 and updated thousands of bios and firmware. then it errored out and bricked and in all the research never pulled this forum up. even with Duke in the field. and I hadn't even thought to bake up the one on the unit. I did see that this brick from flashings has bricked the PC3 in every type of bike and in high numbers. I'm a musician artist and single (= poor and why isn't he homeless). So I improvised and was going to try to force a low level flash with a couple of tricks that might help. I noticed it would say can't communicate with, and no serial number but saw when I gave power to unit, it cycled but went to same error. maybe this will help someone else? so I grabbed USB 3.0 extension cable, a powered USB 3.0 Hub and plugged into my USB 3.1 10Gbps port and plugged the mini 2.0 that is backwards compatible with usb 3.0 and 3.1. then into unit. instead of bike or 9v battery I made plugs from a PCIE plug , and then connected to one of my guitar pedals 9v digital dc power adaptors. lastly uninstalled then reinstalled control center sowtware. loaded firmware to low level flash tool and started. even thou error still showing cant communicate it was flashing and worked, only I lost my tune. downloaded one of DYNO's, the one with a full yosh. and was beside myself that I didn't have a clue what to do, so took bike short run to see what I was stuck with. and I was thin, the pull in my chest was in every gear, gone. blew my mind that my new girl was week and thin compared... But the reason I wrote this novel is a huge thanks, that I found at least a map with duke in notes. I'm impressed with the two I've tried, Duke's and the Performance one. my bike has power through the whole spectrum, and in 6th gear one freeway, just pulling to like 6, front end still lifts to almost up. I owe you all thanks.. And yes my bike is kinda Star Wars themed, an X-wing. there's reasons.. Joshua

Thanks for the add