Gen 1 Fork removal: How to with pictures

This tutorial will be the first in a list of many I'm planning on doing. If there are special requests for tutorials, let me know, and I'll do what I can. This is rather picture intensive, but goes step by step for the people who have never done this before, to include some tricks and tips along the way.

Forks need to be removed occasionally for upgrades, and for basic maintenance. Some people fear working on their own bike, of fear that they don't have the tools or knowledge to do so. The purpose of this tutorial is to remove the mystery, and show how easy it really is.

First off, you'll need the typical tools that you'll need to do any of the work on the bike. In this case, a 12mm, 10mm, and a set of allen wrenches. You'll also need a set of front and rear stands to remove the forks. (Rear stand is mandatory. Front stand can be substituted by using rag covered jack stands either on the frame or on the frame sliders. However, if you plan on working on your bike on a regular basis, saving money on tire changes, going to the track, or even storing the bike for a period of time, I'd recommend buying a set of stands. They can be had for roughly $150-$160 on eBay for both. Drop me a PM if you need to know where.)
Front Stand: 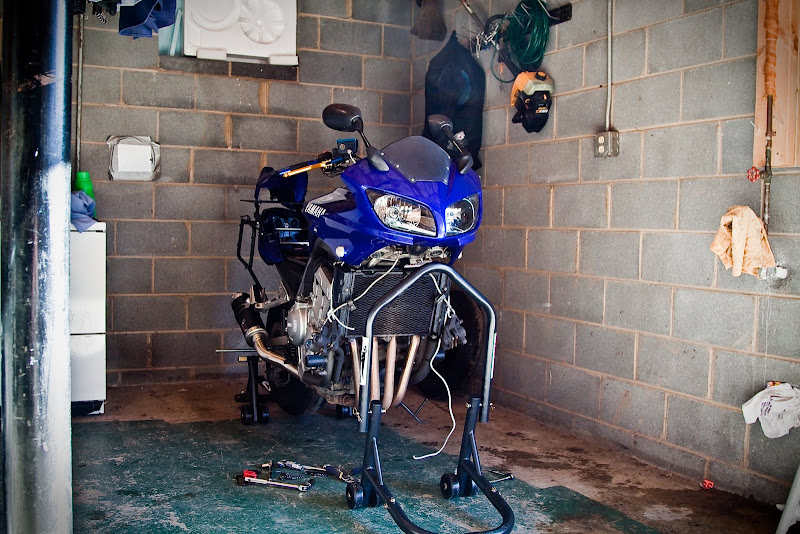 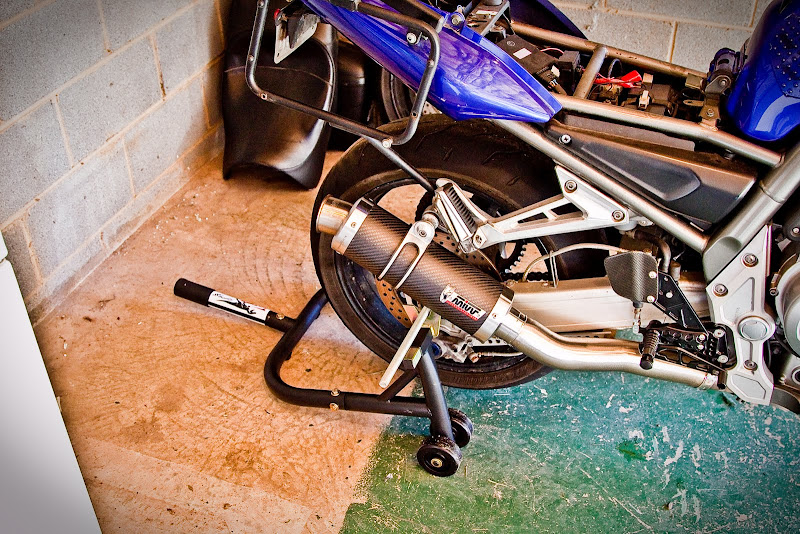 Note, the rear stand isn't being used as intended... it's intended for a bike with spools... the Gen 1 doesn't accept spools... I have new arms for the rear stand that should be delivered soon.
So, you should have all of the normal tools, the one thing you might not have is the front axle tool. Or, that is, you don't think so do.... but... take a look in your tool box, and you'll find that you do. 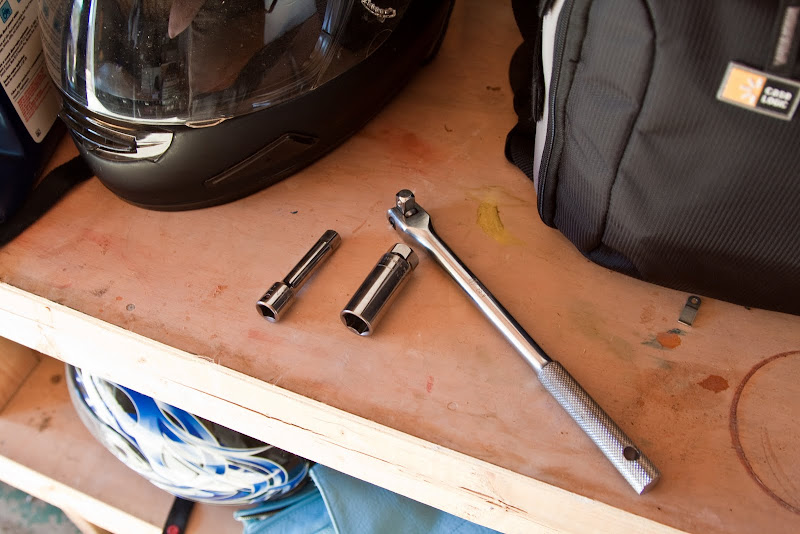 Yep. It's really that easy. Grab a 3/8" drive 5/8 Spark plug socket. Flip it around backwards, and notice that it's a perfect fit for the front axle. Take a screwdriver and push out the rubber on the inside of the socket, and push a 3" extension through the socket backwards. That's your completed axle tool. 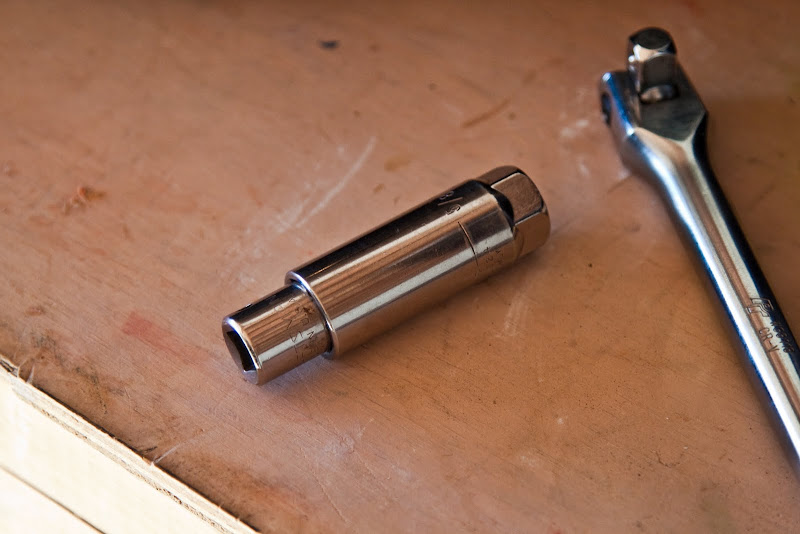 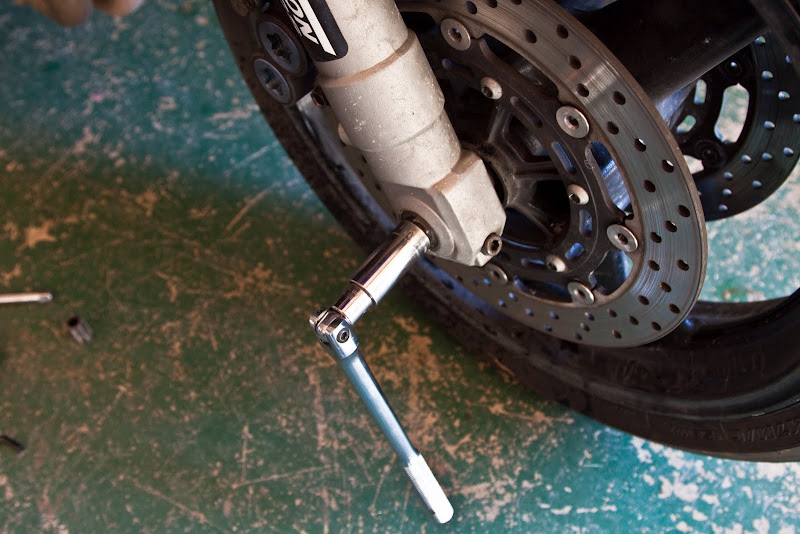 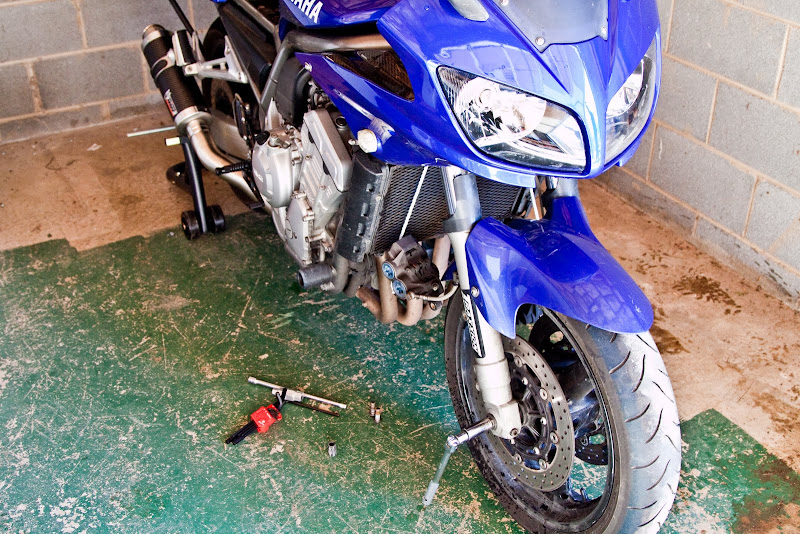 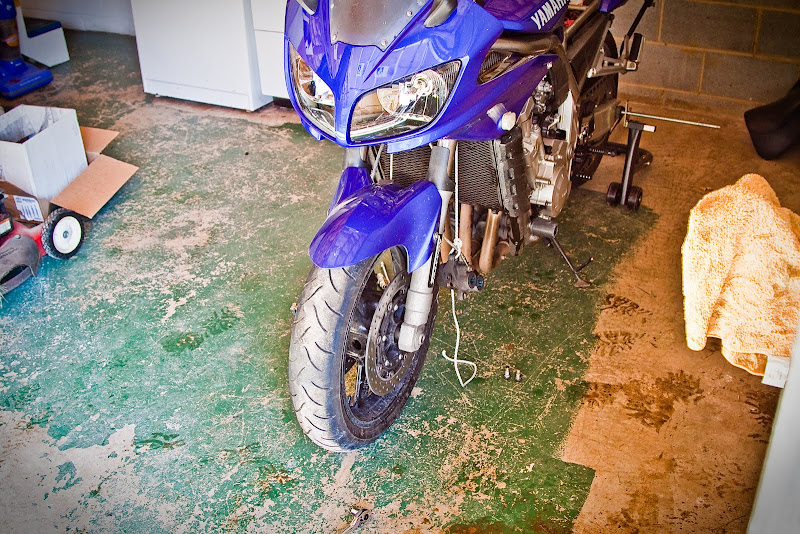 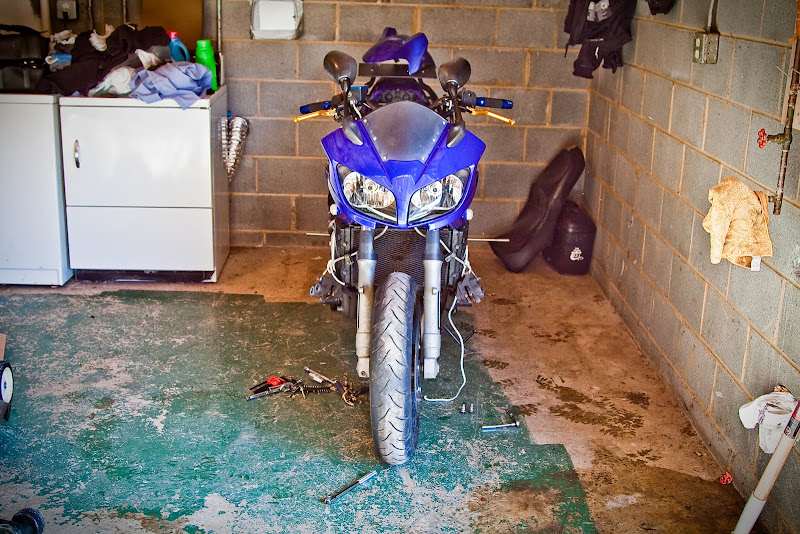 Now that the calipers are out of the way, and the fender is sitting somewhere safe, it's time to get the bike up on the front stand. 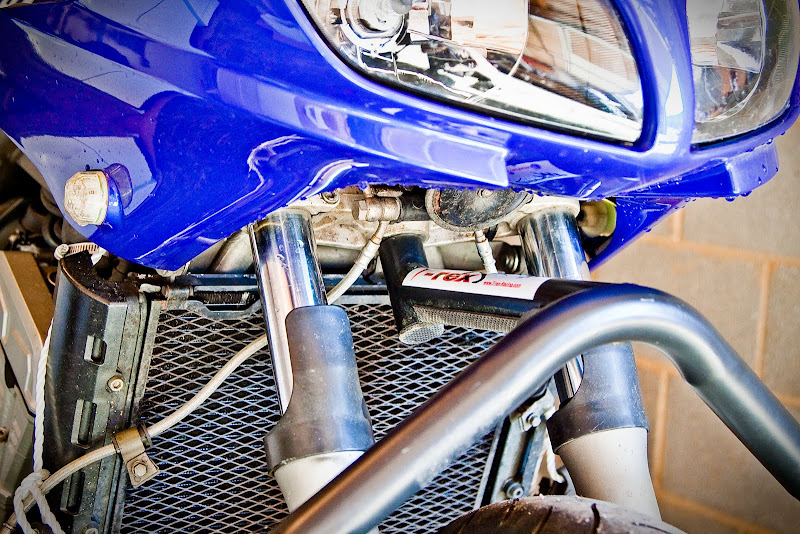 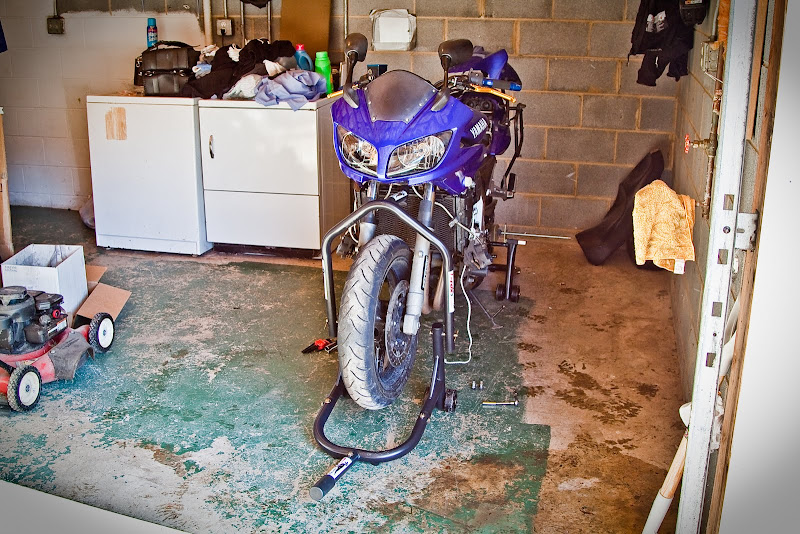 Now, take the front wheel off. Since you loosened it up on the ground, you should be able to spin it out by hand. Get it all of the way loose, then support the wheel as you pull the axle out. Set the wheel and axle to the side. 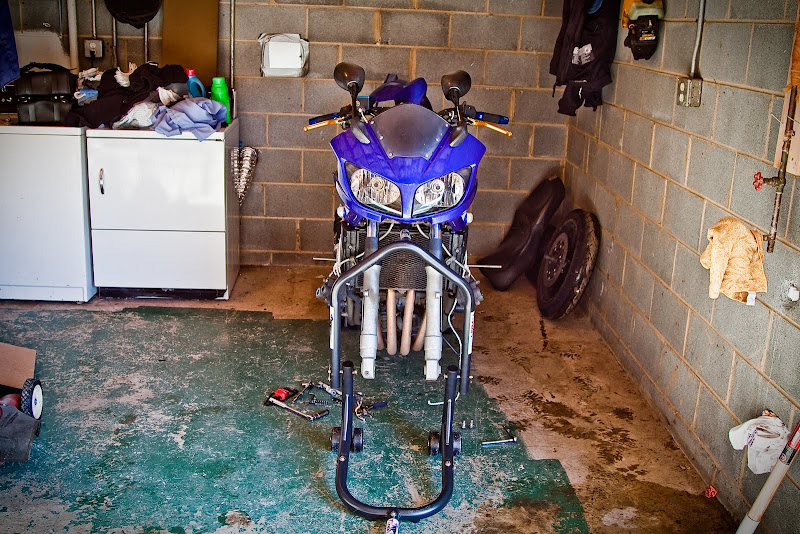 Now, you're almost ready for the forks to come out. Each fork is held in place by 3 allen bolts. One up top, and two at the bottom. 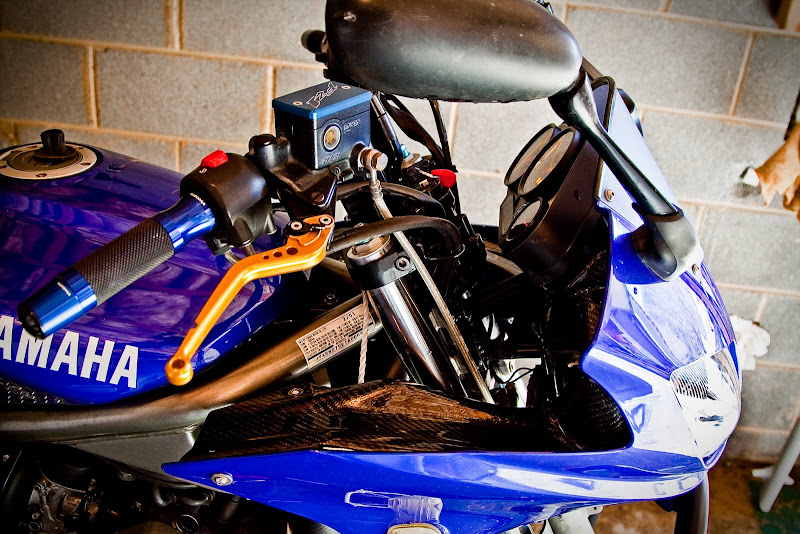 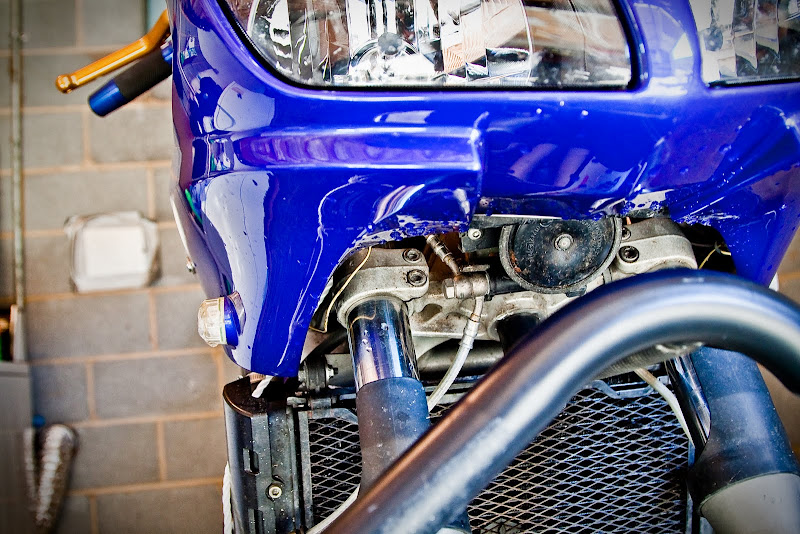 (On the picture on the left, you can see the forks set at 7mm above the triple tree. This is the fork height "mod" we're frequently talking about on the Gen 1 side of the house.)

and it's that easy. Here's the bike with the forks off: 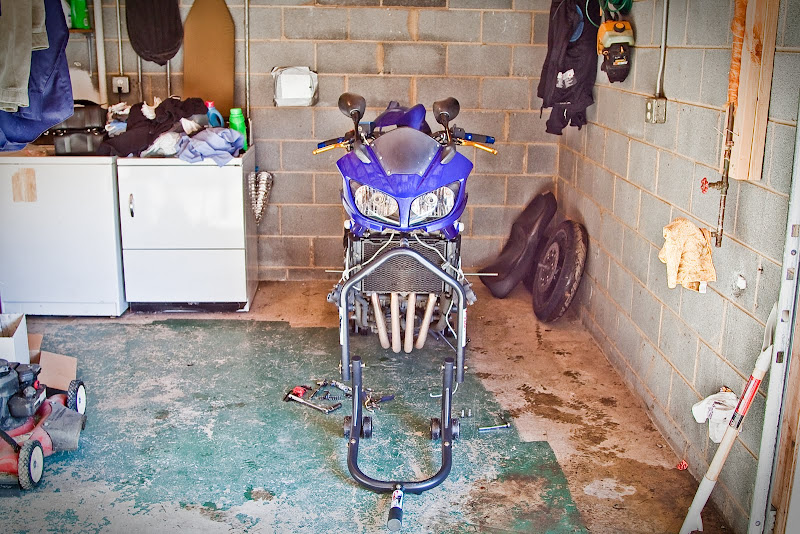 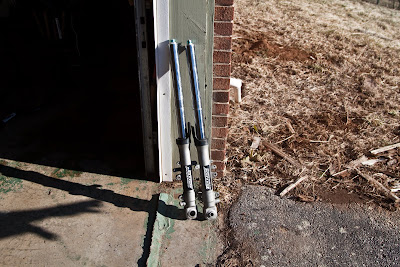 This if from the lower triple... I'll be asking Lee about this... 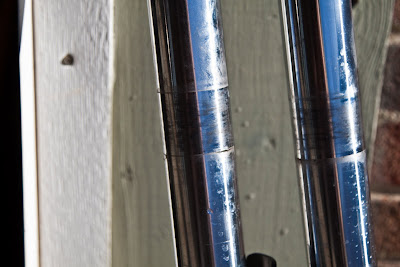 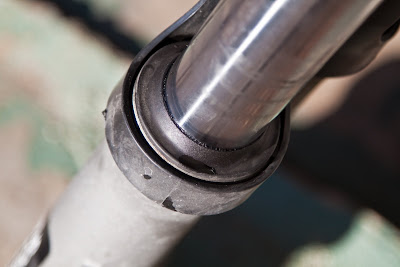 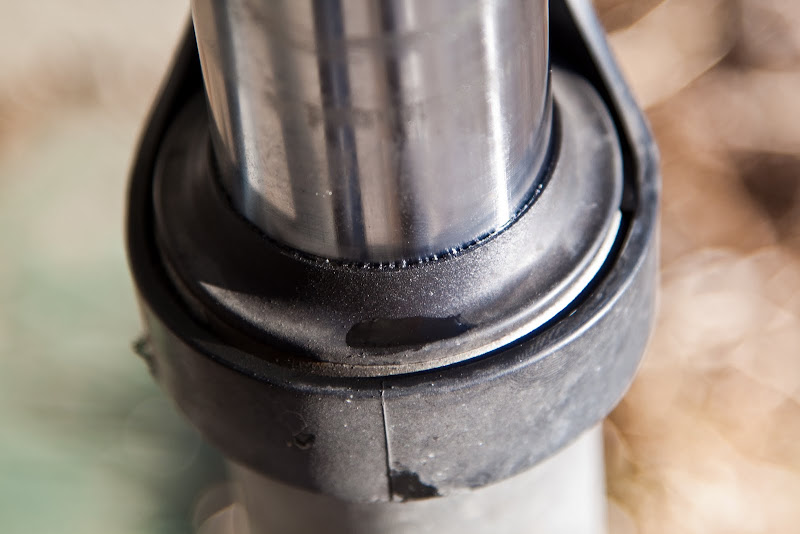 So... Tuesday, we go to Traxxion Dynamics. More pictures will follow from there.

Also seen above: Bluing on the front tire. Bluing is cause by overheating the tire.
Last edited: Mar 7, 2010

This is exactly the kind of stuff I am looking for...only I have a Gen II, thanks for the info though.

cos_fz1 said:
This is exactly the kind of stuff I am looking for...only I have a Gen II, thanks for the info though.
Click to expand...

Gen II fork removal should be pretty much the same. You will even need the same spark plug socket that Aaron improvised to remove the front axle. And those T-Rex stands with the proper spools (which T-Rex sells as well) will work just fine for the Gen II bikes.

Aaron nicely done. This looks like it will be a very useful post for the less technically inclined around here
Last edited: Mar 7, 2010

cos, on the Gen II, if you still have the center stand, you don't need front and rear stands. You put the bike on the center, weight down the rear and an empty 1 gallon paint can will fit under the headers to keep the front of the bike up. :tup:

NJFZ1 said:
Gen II fork removal should be pretty much the same. You will even need the same spark plug socket that Aaron improvised to remove the front axle. And those T-Rex stands with the proper spools (which T-Rex sells as well) will work just fine for the Gen II bikes.

I resemble that remark

Hay o'l buddy, o'l pall, mind if I come over and you can just..............adjust....my......... No, serriously, today I got around to for the first time really reading the manual and adjusting the front forks. I had mis-matching adjustments from tube to tube, so I went to zero and did the appropriate number of turns or clicks and boy it 'feels' a lot better than before. This post makes me really wonder just how good it could be with parts and fine tuning. EXCELENT post..!

Even though I have a Gen 2 It was a usefull post for me, the improvised tool was good to see with the use of the socket extension. Never thought of useing a rear stand that way but why not !
Last edited: Mar 10, 2010
You must log in or register to reply here.
Share:
Facebook Twitter Reddit Pinterest Tumblr WhatsApp Email Link
Top